The Ultimate Guide to Promise Rings for Men 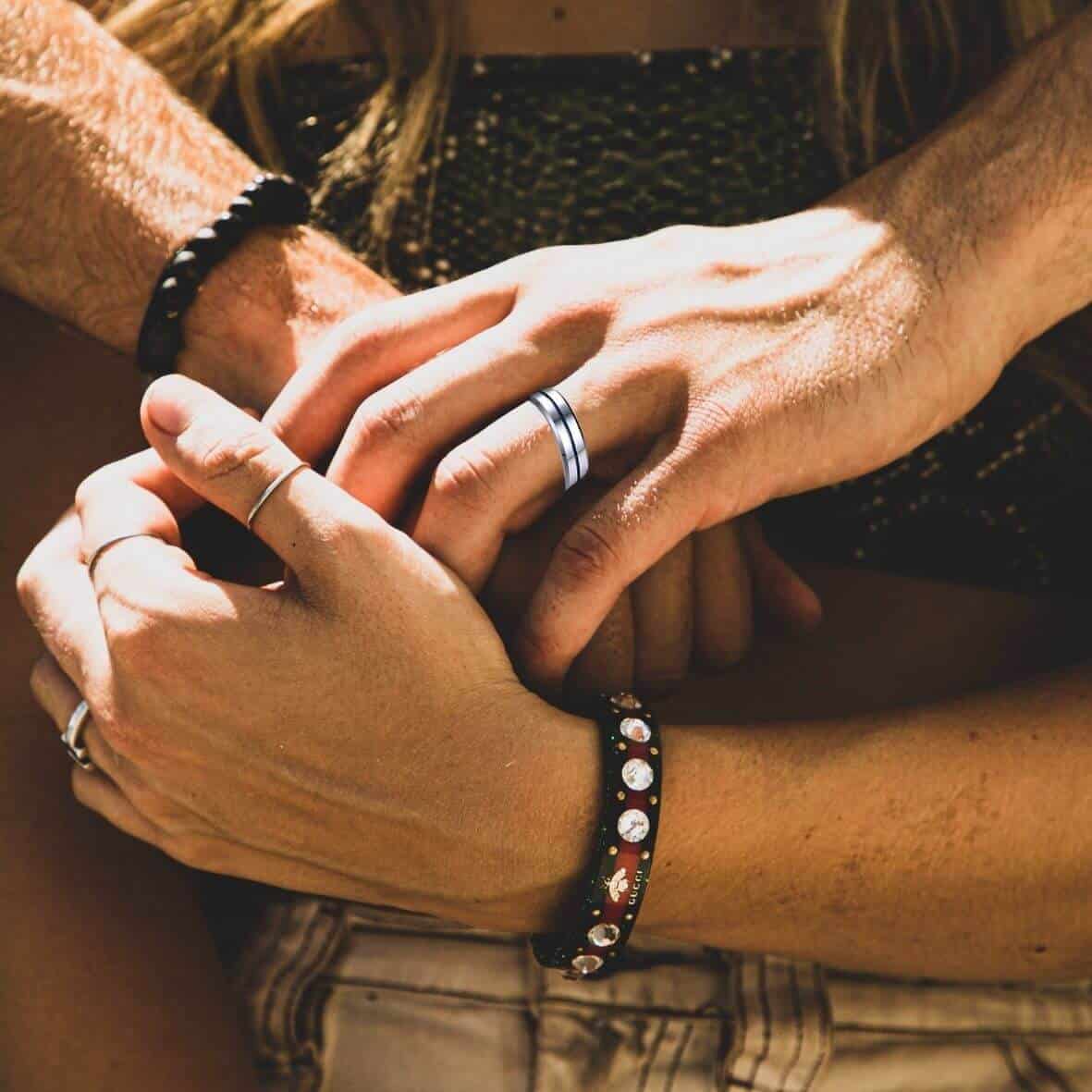 Find out the true meaning, symbolism, and purpose of a promise ring. Over recent years, promise rings have become remarkably popular for both men and women. Maybe you are wondering what they are all about and whether it is something for you.

What is a Promise Ring?

As you may well guess from the name, a promise ring essentially symbolises a promise made between two people. This may be the promise of love, friendship, or a future intention to marry.

The nature of the promise varies between couples but the principal idea is that each of you are making a serious promise to each other. The promise ring serves as a symbol of that promise.

For example, the promise ring is often used by couples as a symbol of their love and commitment to each other – and a promise that they will be true to one another.

Some couples decide to have a promise ring to show their intention to marry in the future – perhaps they are too young to get engaged, or simply not quite ready for this step.

Other couples choose to wear promise rings to express their devotion to each other when there is no particular intention of marrying – or perhaps if they have decided that they will not ever marry. The promise ring represents their commitment to each other.

Couples who are unable to live near each other due to work or any other reason may choose to wear promise rings to show their commitment and seriousness of the relationship.

For whatever reason you are considering a promise ring, it is an undoubtedly a charming and beautiful way to express your love for your partner. 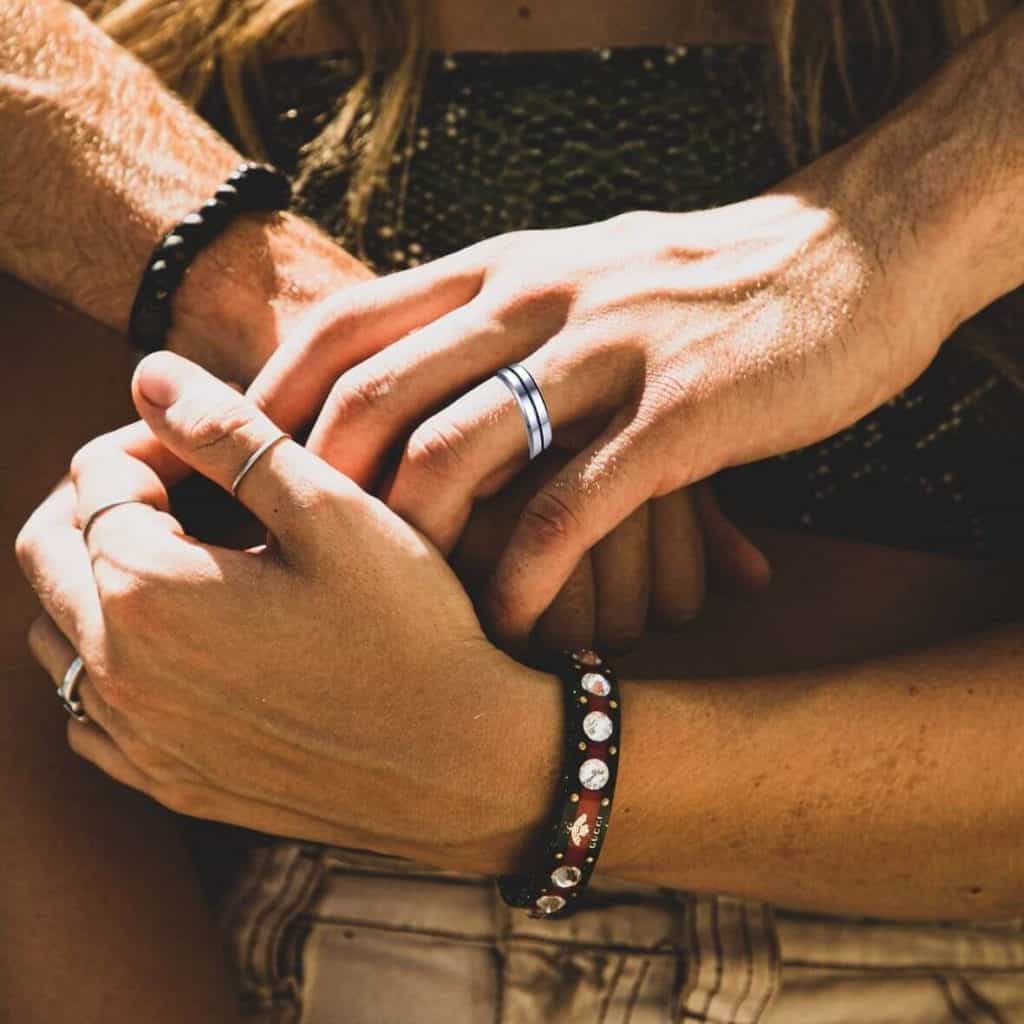 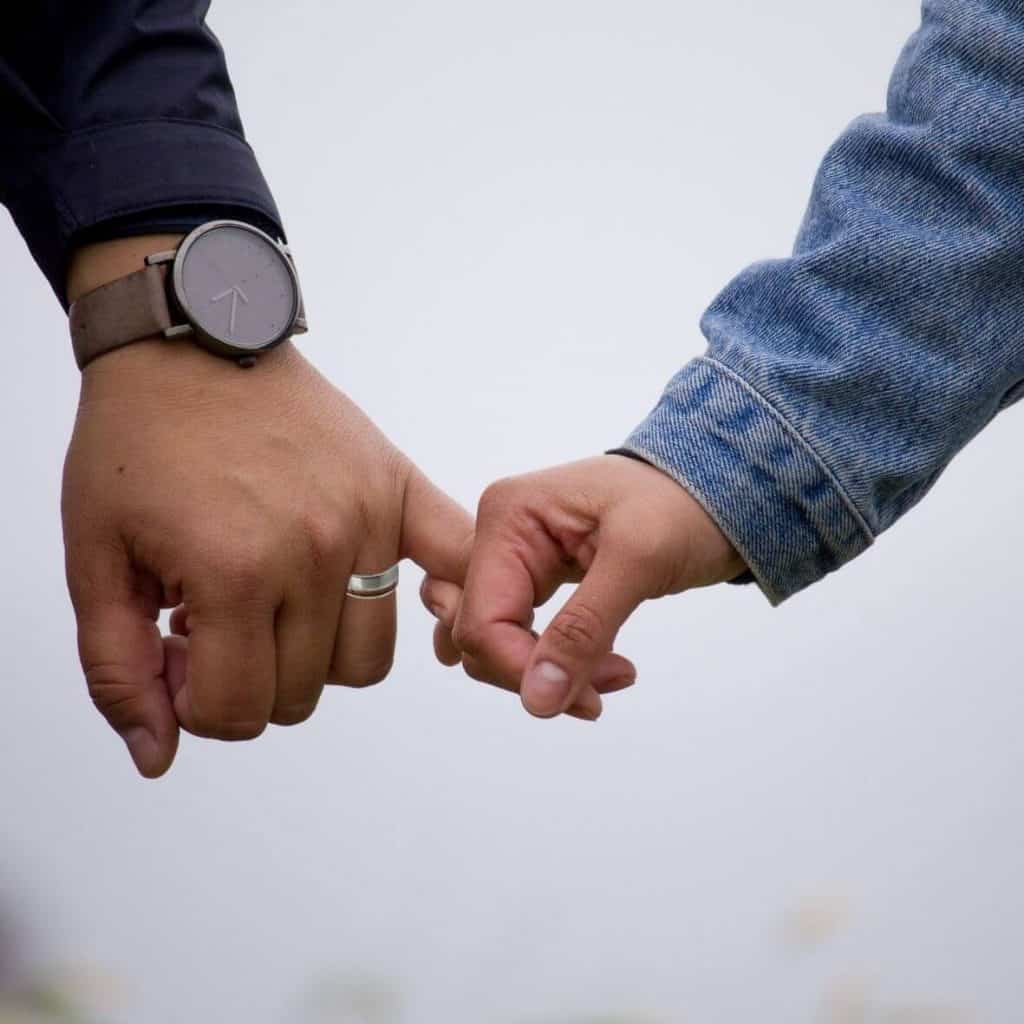 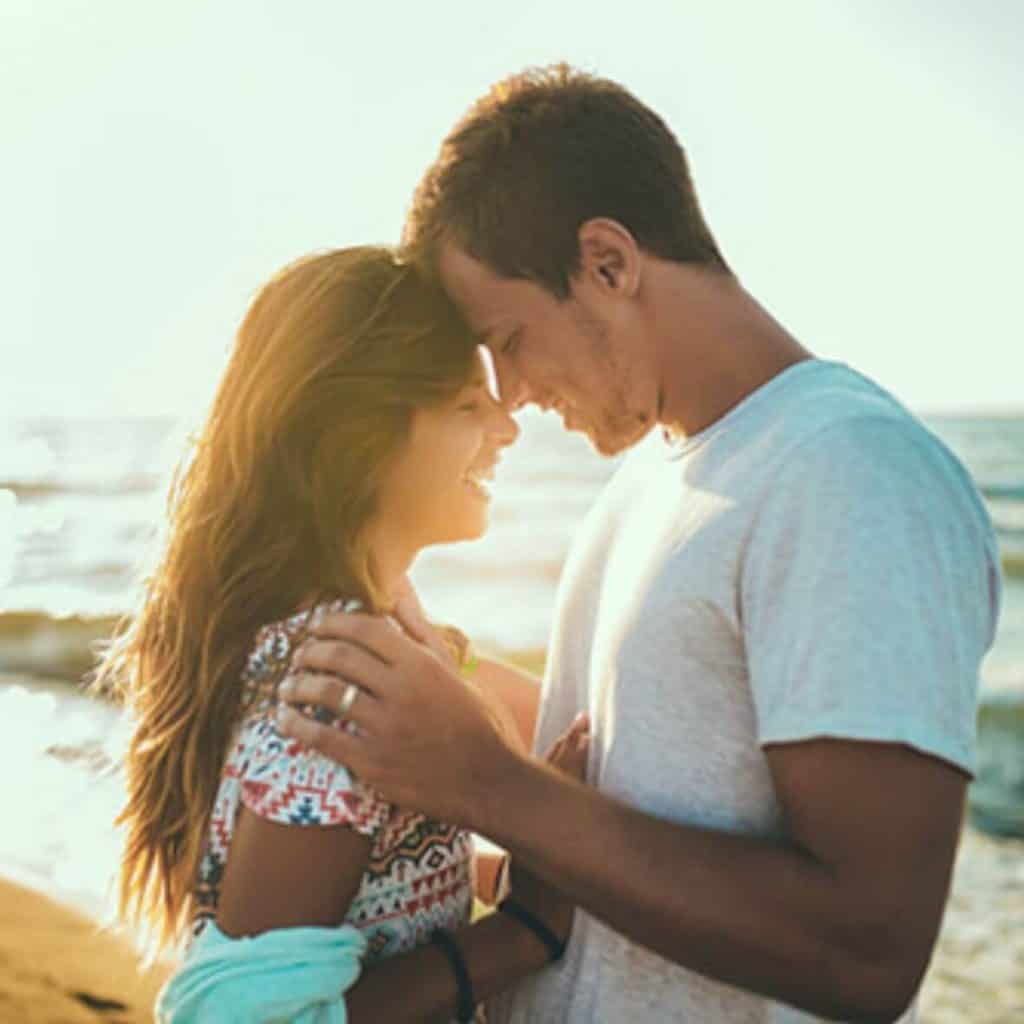 Show Me Promise Rings for Men

What is the Difference Between a Promise Ring and an Engagement Ring?

This does not mean that the promise ring will not ultimately lead to marriage – but it simply stands to express love and devotion to an exclusive relationship. Marriage may or may not be on the cards, that is essentially for the couple to decide – either now or in the future.

What is the Difference Between a Promise Ring and an Eternity Ring?

In contrast, key to the promise ring is that it represents a particular promise made by the couple.  Usually, within the promise, there is an element of hope and promise for the future.

The History and Origins of Promise Rings

Contrary to the widely held assumption that Promise Rings are a new, contemporary, and forward-thinking notion, Promise Rings have their place in history and are steeped with tradition.

As early as the 13th and 16th centuries, it became traditional for the man to give what was known as ‘posy ring’ to his dearly beloved. The name ‘posy’ comes from the word poesie, which is French for poetry / poem.

As you may imagine, these rings were inscribed with romantic expressions such as ‘love conquers all things’, ‘united hearts’, ‘love forever’. At this time, the words were not just an expression of love but also as a mark of the man’s education and literary intellect.

Later, more elaborate promise rings became popular. During the Georgian and Victorian eras, promise rings were typically adorned with gemstones. The first letter of the name of each gemstone was sometimes used to spell out a message such as ‘love’ – for example, these promise ring would feature the gemstones lapis, opal, verdelite tourmaline, and emerald.

Historically, promise rings were essentially used to express a couple’s intention to marry. It may be that they could not yet afford it, but the promise ring was there to show the expectation of eventually marrying. For a man who could not afford an engagement ring, the promise ring would stand as a placeholder for the time being.

Show Me The Rings

Promise rings, like Wedding rings, were traditionally only worn by women but are now worn by men and women alike.

Some couples choose to wear promise rings that match while other couples prefer to choose individual promise rings – either choosing for each other or themselves.

Choosing individually means that you can pick a ring that suits the person’s individual style and personality.

When to Give a Promise Ring

A promise ring can be given at any time and for any occasion. There are no rules or guidelines, so you are completely free to go with whatever feels right for you!

Since the promise ring is such a symbolic gesture, couples may like to discuss the idea of a promise ring first.

Indeed, if you were to surprise your partner with a promise ring, they may well take it to be an engagement ring – maybe not what you had in mind!

And the whole idea of a promise ring is that together you are ready to make a promise and commitment to each other. So, you may need a bit of planning before simply presenting your partner with a promise ring.

You may like to decide that you will each present each other with a promise ring to celebrate and mark an anniversary – or Valentine’s Day, or even Christmas.

It tends to be an appropriate gift if you have been together for a reasonable time – although that is ultimately up to you!

How to Give a Promise Ring

In contrast to giving your partner an engagement ring, there are no real expectations associated with promise rings.

In keeping with the spirit and essence of the promise ring, you will most likely want to discuss the promise that you have made to one another, and to talk about what the relationship means to you both. This may be something you say spontaneously, or something you practise before hand. It really is up to you both.

If you want to, of course, go ahead and plan a romantic moment in which to exchange rings. This is a personal moment so make sure it is just how you guys want it to be!

Who Should Buy and Choose the Promise Ring?

Promise rings are truly unique to each and every couple. This goes right the way through to who should buy and choose the ring. There are no rules and so it really is up to you.

It might be that as a couple, you decide on Promise rings and then each go to choose your own. Or you may choose for each other or choose together. There is no right or wrong way.

Which Finger Do You Wear Your Promise Ring On?

In keeping with the unique meaning of each promise ring, you can also decide on which finger to wear the promise ring. Indeed, there is no particular tradition or rule when it comes to which finger – for men or women.

Promise rings can be worn on either hand and on any finger. It is completely your choice.

Many people choose to wear their promise ring on the left ring finger. If an engagement ring is later worn, the promise ring will either be replaced or moved to the other hand.

Also popular is for the promise ring to be worn on the right ring finger. This can then be kept if you do decide to marry at a later date.

Promise rings for men and women are also commonly worn on the middle finger of either hand.

How to Find Out Your Ring Size

Once you have decided on whether a promise ring is for you, it is a good idea to think about which finger you will wear the ring on. Practical because you will need to know your ring size – and therefore which finger you need to measure – before you buy your ring!

You can have your finger sized at a jewellery shop. Or Newman Bands will send you a ring sizer in the post.

With an incredible range of rings for men, many of the ring designs at Newman Bands would make a perfect promise ring.

If you order a ring, you will be sent a ring sizer in the post for free. Then once you know the ring size you need, all you need to do is email with your size.

When it comes to promise rings, individuality is the name of the game. This includes everything – what promise the ring symbolises, which finger the ring is worn on, when the ring is given, who gives who the ring. And of course, equally as important, the style of the ring. It can be anything you want it to be.

Although most importantly a question of style and preference, the colour of your ring is also symbolic.

For example, a promise ring that incorporates blue in the design reflects your loyalty and constancy. Or black serves as a symbol of your strong and serious relationship.

Or you may prefer a more traditional gold or silver but in strong and scratch resistant tungsten carbide or titanium.

For a full analysis on what your ring colour says about you take a look here.

If you are looking for a truly unique men’s promise ring, you may want to choose a design that features an inlay of a natural material such as wood, shell or naturally shed deer antler. Each of these brings a beautiful element of nature to your ring and which may reflect something about you personally.

For example, wood shows your down-to-earth, genuine, and everlasting love as well as your affinity with nature.

Shell can be used to symbolise the constancy and almighty strength of the sea as well as your relationship.

Or naturally shed deer antler is a fantastic way to show your individuality, love of the outdoors and nature. 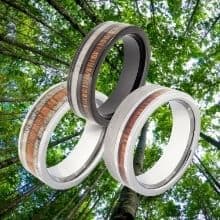 The basic rule of thumb to remember is that there are no rules when it comes to choosing a promise ring for men or women. Just go with what you like, whether that be something traditional, contemporary or completely unique.

What to Consider When Choosing a Mens Promise Ring

As well as what your promise ring means to you as a couple and the style of the man’s ring, also important is the metal used to make the ring.

If you are a man who leads an active lifestyle, both tungsten carbide and titanium are metals which offer supreme scratch resistance and strength.

For an in depth look at the different metals used for rings, click here.