Rings for Sensitive Skin – A guide to hypoallergenic rings that won’t irritate your sensitive skin. 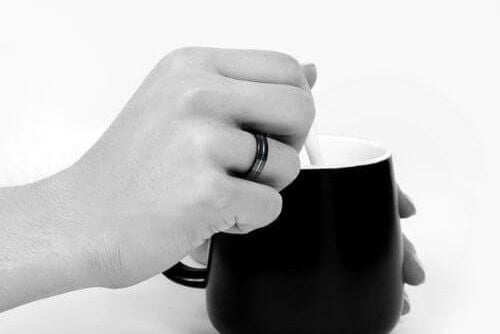 Sensitive skin can make wearing rings problematic. Certain metals and materials will irritate your skin, whether in a minor way, or in a completely unbearable way. This is undoubtedly horrible, but easily avoidable. Here at Newman Bands, we have a huge range of rings and wedding bands that will not irritate your sensitive skin.

In this article, we will take you through everything you need to know when looking for the perfect ring – one that is not only just what you are looking for, but that is completely hypoallergenic and certain not to be an irritant.

The key to finding a ring that will not cause any irritation or allergic reactions is knowing which metals are likely to cause a reaction, and which will not.  So if you are ready, here goes:))

How do you know if you have Metal Sensitivity

Metals Most Likely to Cause Irritation

What is Ring Rash?

How to Prevent Ring Rash

How do you know if you have Metal Sensitivity?

If you are highly allergic to metal, you will definitely know about it already. Some people will have a strong reaction to simply touching jewellery, coins, or even metal door handles. Other people may find that they have a metal sensitivity only when they have been wearing metal jewellery for some time.

A sensitivity to metal is pretty much the same as any other allergic reaction. This is in the sense that your body reacts to the metal like a foreign invader. Your body comes back at it with an immune response – for metal sensitivity, this is most often redness, itchiness, swelling, a rash, or even skin blistering or scaling.

Every person will experience metal sensitivity in a different way – but the response your body makes to specific metals will be the same each time. And people’s symptoms of the metal allergy can either be mild, or severe, or anywhere in between.

You will most likely already have some idea about whether you may be sensitive to metal but if you want certainty, skin patch testing is the way to go. This will tell you whether you are or not – and exactly which metals you are sensitive to.

If you suspect that you are allergic to nickel in particular, you can buy a nickel spot test online. This is especially useful as nickel is the most likely metal to cause an allergic reaction.

Metals Most Likely to Cause Irritation

Whilst you can become allergic to any metal, the most likely metal to cause irritation and allergic reactions is nickel. This is problematic for many people as nickel is the base metal for the vast majority of low-cost jewellery.

For most people, problems only begin with repeated, or prolonged exposure to nickel. This means that you could try on a piece of jewellery that contains nickel and not have any kind of reaction. Then a few months down the line, it could be that your allergic reactions start to kick in.

Essentially, people with sensitive skin, or who suspect that they may be allergic to nickel, should completely avoid jewellery that contains nickel. It is only a matter of time before the unpleasant allergic reactions begin.

Estimates suggest that 17% of women and 3% of men are allergic to nickel. Other metals that can affect people are cobalt and chromium. These effect between 1 to 3% of people.

Another metal likely to cause irritation is lead. Not nearly as widely used as nickel, this is also one to avoid at all costs.

Interestingly, reactions to metals can be localised (in other words only effect the skin that has been exposed to the metal / jewellery), or can affect other parts of the body (not even directly touching the actual jewellery).

What is Ring Rash?

Ring rash most often occurs with a ring, such as a wedding ring, that is worn all the time. A rash appears on the skin directly underneath the ring. Surprisingly, this may not appear when you begin to wear the ring but can occur as long as several years after you have been wearing the ring. A ring rash can come and go, and likewise be severe, or relatively mild.

A ring rash includes any kinds of red or itchy patches, scaly patches, swelling or burning, or dry or cracked skin. It differs to other kinds of skin problems, because it is specifically effects the area of skin where you wear your ring.

Ring rash can be caused be an allergic reaction to the metal in the ring (such as nickel).

Slightly different and easier to deal with, ring rash can be caused by a build up of soap, moisture, or debris underneath the skin. After you have worn a ring for a long time, you can imagine that there will be some build up of soaps, lotions, and general debris under the ring, whether on your finger, or on the surface of the ring. This can result in a build-up of bacteria – which can cause irritation, and ultimately a ring rash.

How to Prevent Ring Rash

How to prevent ring rash depends on the cause of your particular irritation. You can either try these methods one at a time to see what works for you, or go for all three at once in the hope that at least one will work!

Generally, there is no need to seek the advice of a doctor when it comes to ring rash. This of course depends on each individual and if you are concerned (especially if you have been unable to clear the ring rash, or it has been going on for a period of time), you should consult with your doctor.

A hypoallergic ring is one that has a reduced or low chance of causing irritation or allergic reactions to people with sensitive skin.

If you are prone to sensitive skin (even if you haven’t officially had a metal allergy test), it is important to choose a hypoallergenic metal for your ring. Whilst you already know to avoid nickel and lead, it is valuable to know which metals are ultra-safe and have a particularly low chance of causing you any discomfort or pain.

Tungsten is one of our favourite metals for men’s rings. Not only is a tungsten carbide ring hypoallergenic and suitable for people with skin sensitivities – tungsten also has a lot to offer.

Over recent years, tungsten rings have seen a remarkable surge in popularity for all types of rings, and particularly for men – wedding bands, engagement rings, promise, eternity, fashion, and statement rings. Let’s see what tungsten can offer you.

Not just hypoallergenic, titanium is incredibly lightweight yet as tough as nails. With a titanium ring, you will have a ring that will last a lifetime, and it’s so lightweight you will forget you are even wearing a ring.

A titanium ring is match made in heaven for a man that works with his hands.

If you are prone to skin irritation, or allergies, it is important that you choose a metal that is hypoallergenic. This essentially means that there is a very low chance that the metal will cause you any reaction.

Generally speaking, it is important to avoid rings that have been made with nickel. This is because nickel will often cause irritation, particular to people who have sensitive skin. Nickel is frequently used in lower priced jewellery (such as costume jewellery).

Tungsten and Titanium are both metals that are hypoallergenic and suitable for people with metal sensitivities and / or metal allergies. Also, both are extremely strong, and durable, and have excellent resistance to scratching.

Any other questions, please just get in touch 😊